Capcom are continuing with their mission to release somewhat older console games on the PC. BIFF! Generally speaking, most of these ports have been pretty good. WHACK! Ultimate Marvel vs Capcom 3 is very much in “definitely a port” territory, but it works quite nicely. KAPOW!

Marvel vs Capcom 3 (and, indeed, its Ultimate re-release) is a hyper-flashy, hyper-fast, hyper-everything fighting game that pits Marvel stalwarts like Wolverine and Iron Man against Capcom veterans like Ryu and Strider Hiryu. It uses a three-on-three tag-team format for its battles, allows for stupendously long combos, and is one of the silliest fighting games on the market. Don’t get me wrong: the skill cap is typically high, but it’s possibly the only fighting game to have one character smack another in the face with their own health bar (hello, Deadpool) or literally bury the opponent in paperwork (objection, Phoenix Wright).

Still, it’s quite accessible for newcomers. It has the traditional fighting game problem of having no real tutorial to carefully introduce players into the concepts that really matter – and really, even games that try to do this usually fail miserably – but it does have a Simple control system that lets newbies pull off impressive combos by just hitting buttons without resorting to button mashing. Nonetheless, I don’t think it ever tells you things like “tap the Assist button to call in an Assist, but hold it down to switch character” unless you experiment or delve into the manual.

I must say, while you can maybe complain about the textures (or handwave that as part of the art style), it looks rather good at high resolutions. It looks gorgeous in motion, too.

The short version is that it’s a bare-bones port with more than a few problems, but nonetheless, Ultimate Marvel vs Capcom 3‘s release on PC is still functional and its issues aren’t likely to dissuade anyone who really wants to play it.

First things first: the PC specifics. This is tremendously easy, because one of the sub-menus in the options is actually “PC settings”.

You can probably also see that the menus are very clearly upscaled.

Resolution aside, those are basically the maximum settings, and my i7-3820/16GB RAM/GTX 970 doesn’t struggle with it in the slightest. Resolution does go up to 4K, so if you have a monitor that can support it, Ultimate Marvel vs Capcom 3 is more than happy to use it. Framerate is capped at 60FPS, but – while I’d be curious as to how absurd this would look at 144FPS – 60 is just fine for something as hyperkinetic as this.

This is also where I began to wonder exactly how much attention had been paid to this PC re-release, mind you, because (on keyboard at least) the Texture Quality setting actually had reversed controls, with a left tap raising the quality and right lowering it. In fairness, this is an option you’re probably only ever going to adjust once, and I haven’t spotted similar issues elsewhere in the options. That doesn’t mean they don’t exist, mind.

For what it’s worth, here’s a look at the game on maximum and minimum visuals. Short version: its minimum is nicer than Street Fighter V ‘s minimum.

Visuals aside, the other settings menus are largely what you’d expect: subtitles on/off, changing the voices of individual characters between English and Japanese, changing the various volume settings, and controls. We’ll get to controls in a sec, but I do want to highlight two more things: firstly, there doesn’t appear to be a way to disable voice chat for online play. Download aplikasi drakor.id untuk laptop. This always annoys me because I don’t want to talk to people; I just want to punch them. which, now that I think about it, is my general outlook on life. I can at least set the voice chat volume to zero, but I’m assuming people can still hear me.

Secondly, one of the audio settings lets you swap the BGM and SFX between “Classic Sound” and “Dynamic Sound”, which actually has quite an impact. I can’t detail exactly the difference it makes, but Classic sounds a lot more arcade-y, with (I think) a bit of a filter on the announcer, while Dynamic changes things to sound more fancy and orchestral. A minor touch, but a nice one. 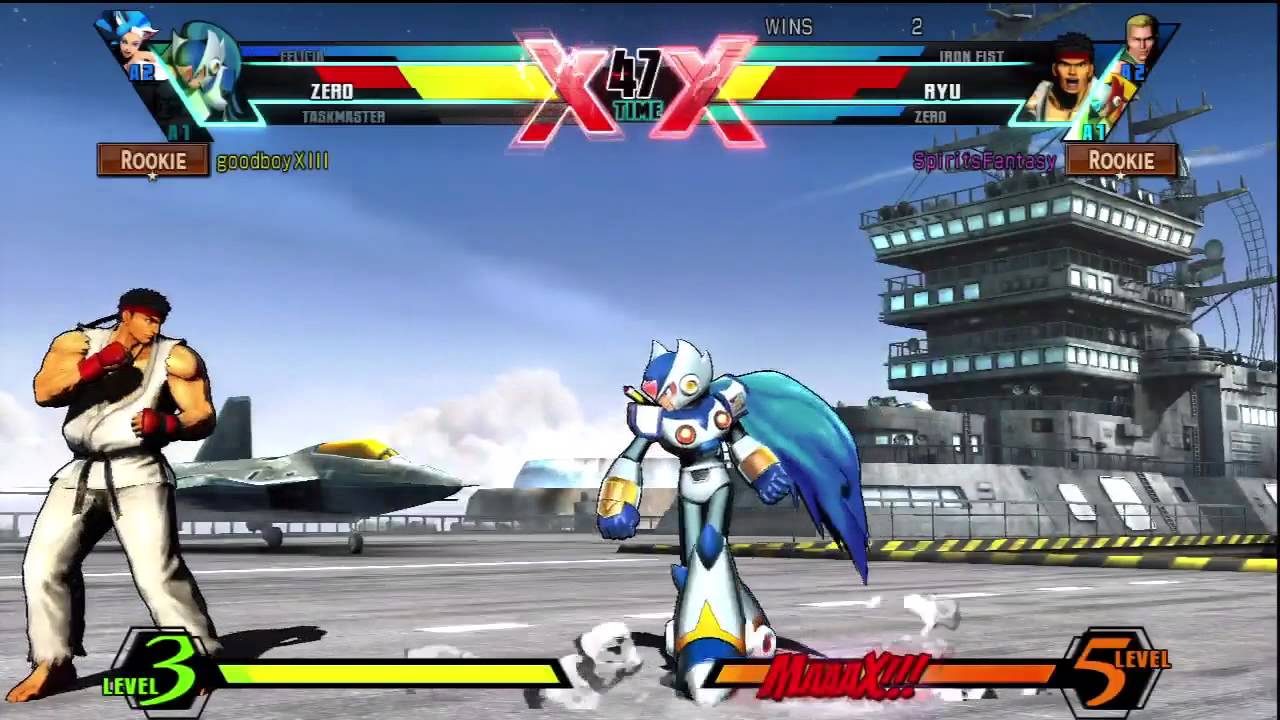 So, controls. Keyboard warriors are pretty well-catered for, with multiple presets. If you want to control with the arrow keys and use the left side of the keyboard for your attacks, you can; if you want to control with WASD and use the other side of the keyboard for attacks, you can. If you want to manually customise the controls, you can. Huzzah. For what it’s worth, I actually find Marvel vs Capcom 3 pretty playable with keyboard, but then I’m a crazy person. Some inputs are tricky, but I do like having every button I could possibly need right there instead of having to mess around with triggers and bumper buttons. Still, controller is the best way to go – at least until we get a keyboard with a built-in D-pad and analogue stick.

There are three different keyboard presets, although you can customise it however you like.

I’ve also tried it with two controllers, with… mixed results. My Steam Controller worked fine, with no issues whatsoever. My DualShock 4, on the other hand, had very confused button inputs. The bumpers were the triggers, the face buttons were swapped around (X was O, for instance) and the D-pad didn’t work at all. I suspect this is probably to do with the way Steam now tries to natively use the DS4 controller, but I don’t know for certain. I can say that, after firing up DS4Windows and running Ultimate Marvel vs Capcom 3 using that as my way of getting the gamepad working on the PC, it was once again flawless.

A quick note to say that I’ve seen a bunch of reports from people saying their controllers haven’t been working; some were talking about fightsticks, others were talking about Xbox 360/Xbox One controllers. I have no idea what’s causing this, or if it’s an issue that’ll impact everyone, or what. Unfortunately, I don’t have a 360 controller to test.

Finally, online play. This is another thing I can’t talk about in too much detail for a couple of reasons. For starters, it took me a few minutes of playing with the settings (anywhere in the world and same rank; anywhere in the world and different rank; ranked matches; player matches; lobbies…) to actually find a game, which put me against a German with a one-bar connection. He was hosting the lobby, so I expected it to be lagtacular. Instead, it was… basically perfect. I expect there to be more issues with the netcode than I’ve seen in the one game I managed to find because a sample size of one is not enough to actually judge anything, but I was pleasantly surprised. After I finally managed to find a game, anyway. Maybe it was super-laggy for him, but not for me? Hm.

I, uh… I did mention it was really flashy, didn’t I?

Now, I’ve gone over a lot of negatives here. Controller issues (which I resolved), weird menu problems (which only appear to be on Texture Quality), no voice chat disable short of unplugging the microphone, limited graphic options. But I’d argue that these are actually pretty minimal.

Well, okay, the controller issues aren’t, and neither is the Versus mode if you’re buying this for keyboard-on-controller action. If you can’t play this with your controller and you don’t want to play it with the keyboard, the controller thing is a massive problem, but it’s also one I can’t really investigate any further short of buying an Xbox controller. This is the one thing I’d argue is a genuine sticking point, and you might need to investigate further to see if people get this issue resolved before you pick it up.

What I can say is that when those issues are out of the way, it’s still Ultimate Marvel vs Capcom 3, and you’re still having Morrigan impale Deadpool while Haggar and the Hulk have a wrestling match, in glorious 60FPS. Its comic book art style and flashy visual effects also mean that it looks really nice, even five years on from the original launch.

Wasn’t kidding about the whole “Deadpool can wrench off his own health bar and smack the opponent with it” thing, by the way.

In terms of single-player content you’ve got Training, Versus, Arcade Mode, and a Mission mode that tries to teach you combos for the character of your choice. There’s also the Heroes and Heralds mode, which – in single-player – has you earn and use cards to buff your characters, and take on increasingly difficult foes to protect or destroy the world. In multiplayer, it’s a territorial control thing with players on each side fighting for domination.

As this is Ultimate Marvel vs Capcom 3, it also comes with the DLC. You’ve got the alternate costumes and plenty of colours, you’ve got Jill Valentine and Shuma-Gorath, and – in a nice touch – you’ve also got the artbook. I’m a little disappointed the artbook and manual are both in the in-game Gallery rather than in separate high-quality PDFs, though.

I’d rather see this as a high-res image than as part of the game program. Does contain some nice sketches and some indications of characters that were dropped, though!

So yeah, for the price of £19.99, I’d say that Ultimate Marvel vs Capcom 3 is alright. As I said: it’s a barebones port and it’s got its issues, some of which are far more important and problematic than others. It’s also very easy to say “Oh, they did/didn’t do X, they’re lazy and it’s an awful port” and I probably couldn’t disagree. If you want a properly remastered version with mouse-enabled menus and netcode superior to Street Fighter V and 300 different graphical tweakables… well, that’s not this game. This is just UMvC3 running on PC, with keyboard support and some graphic options. It’s a port, and not a fantastic one at that. It just works.

But, while it’s not an amazing version tailored specifically for the PC, it’s still Marvel vs Capcom 3 on PC, and it still works just fine. Definitely a port, but I’m not sure how much that’ll bother the people who want to have Chun-Li slap Wolverine.