Game Guide Basara 2 Heroes PS 2 As with the strategies in general that PlayStation platform 2. tips and tricks and secrets contained in this game, With the constraints of this game that the language is available only in Japanese there is no need to worry because I will gladly help you if there is a problem about this game

Box: Launch normal S-string / combo attacks.
X: Jump or ride a horse. (For Sarutobi Sasuke, Kasuga and Fuuma Kotarou there will be additional movements such as flying in the air is followed by X again).
Circle: Launch Basara attacks.
Triangle: Smooth the Skill movement.
L1: Change the skill that will be launched. Every 1 stage you can only use two types of Skill.
L2: Launch Battle Drive Mode if you already have it. Simply by KOing every 100 enemies and you will get it.
R1: Fend off enemy attacks and do Parry movements. To do Parry, you have to press the R1 button right before the enemy attacks you. .If you do it right, the enemy will kneel temporarily.
R1 + Directions: Avoid enemy attacks.
Select: Launches the Taunt movement.

In this Sengoku Basara 2 Heroes game there are two new modes namely Gaiden Story Mode and Versus Mode. As a help I sort from top to bottom:

Story Mode
For story mode in this game, there are only three characters that can be played,
namely (from above): Katakura Kojuuro, Oichi, and Azai Nagamasa. Here you can see and find out the stories of the three NPC ex-characters in the previous sequel.

In this mode, you can play with settings, characters, and stages
free as you wish. Complete all steps in this mode to complete one of the Title conditions.

Versus the
New Mode Mode that appears in this sequel. Here you can choose to fight the computer or with player 2. Here there are eight types of mini-games that you can play, namely:

UnionBattle
You have to duel two opponents 2. You will not be able to choose a friend or partner because it depends on who the character you use. Here you have to make both of your enemies run out of HP before one of them can successfully restore.

Huge Army Destruction Battle
Here you have to kill as many enemies as possible to get the highest score. Each enemy has different points. If Matsu or Maeda Keiji appears, try to kill him because they have very high marks. Survival Competition Battle

The first one succeeded in making the opponent’s cell phone 0, he won. If you succeed in killing ten enemies, you can send a Bomb Soldier to the enemy arena.

Biggest Combo Battle
Who did the most combos he won?

Daibudokai Mode
Tournament mode is totaling 100 floors. If you win 100 matches, you can get the Final Weapon. This time you can ask player 2 for help to complete this Mode. If successful, both will get the Final Weapon at the end of the match. New features, there will also be 20 challenges that you can do when you play this mode. If you have completed 100 games, you will open the Ultimate Magic Mode.

Options
Where you can set Game, Save, Load, and others.

There is good news for those who still have Sengoku Basara 2 data storage because the data can be loaded when you save the new data in this Sengoku Basara 2 Heroes game. The advantage is that you can forward the data store without having to repeat it from the first. 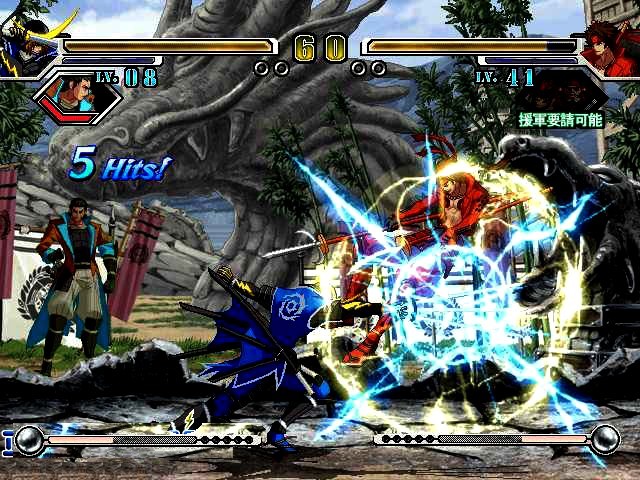 The following are the data that you can load in Sengoku Basara 2 Heroes:

The following is data that you cannot load in Sengoku Basara 2 Heroes:

The way: It’s been available from the beginning of the game.
Effect: Does not affect. The second Weapon How: Play in any Mode except Daibudokai Mode and Ultimate Daibudai Mode with a Normal difficulty level. Result: The Basara parameter increases more. Third Weapon How to: Buy in a store for 8000 Gold Effects: Has an elemental attack depending on each character.

It can also be in the Hard difficulty level but is less likely.
Effect: Has an elemental attack depending on each character.

Eighth Weapon (Final / Ultimate Weapon)
How: Complete all 100 Stages in Daibudai Mode.
Effect: The distance to connect the next combo is longer.

Armor
Each character can obtain three types of armor. Here’s how to get it:

First Armor
How to: Buy in stores for 10,000 Gold.
Effect: The possibility of being able to do Parry is greater.

Second Armor
How: You can find it if you play Mode at the Hard or Extreme level.
Effects: The Basara parameter increases more.

Third Armor (Final Armor)
How to: Complete 50 Stage in Daibudokai Mode.
Effect: If you fend off your attack your defense will not open.

Costume
In this game, each character has one new costume. Here’s how to get it:

First Costume The
trick: It’s available from the start of the game.

Second Costume
How to: Complete Conquest Mode with the character in question.

Alternate First Costume The
trick: Complete Story Mode and Gaiden Story Mode. The following is the

Basara Kuji
Basara Kuji or Lottery is the latest feature in this game. In the store when you want to buy something, you can use Basara Kuji to cheapen the price of the item you want to buy if you already have the issue at least one. To get it you can finish the stage anywhere to get it. Here are the possibilities that can be obtained from Basara Kuji:

Not Lucky
You will only get 100 Golds.

Very lucky
You can get 10,000 Golds or 50% discount for buying an item, or if Goddess of Fortune is on your side you can get a 100% discount or free to purchase an article ðŸ™‚