‘Tis good to be the king.

Capitalizing on the resounding success that was Age of Empires, Ensemble Studios scrambled to create a sequel that was worthy of its predecessor. Three years in the making and one year late of its scheduled release, Age of Empires 2 is every bit of a great sequel as it is a terrific game in its own right.

Just about every facet of Age of Kings has been improved from its predecessor, starting with the graphics and ending with the AI and interface. Yet in the greater scheme of things, it’s still the same game. You’re still tasked with finding a proper balance between gathering resources, advancing your technology and reigning bloody terror upon your enemies.

The graphics are noticeably improved.

Age of Kings is a chronological continuation of Age of Empires and its expansion, The Rise of Rome. The thing that sets the original as well as Age of Kings apart from other RTS games is the large number of technologies available to research combined with the fact that your empire moves through four distinct historical ages: the Dark Ages, the Feudal Age, the Castle Age, and the Imperial Age. Advancing to a new age opens up new buildings and technologies for your empire. Basically, it’s about as close to real-time Civilization as anyone has gotten, and the game’s full of options as a result.

Age of Empires II has on offer an impressive collection of fourteen playable civilizations from around the world. These civilizations aren’t drastically different, but they do offer subtle strategic variations for the shrewd player to exploit. The vikings, for instance, gain a tremendous bonus out of sea combat, and hence will be more efficient on coastal rather than desert maps. The French are famous for their cavalry charges while the barbaric Goths, known for their reliance on mass numbers to overwhelm, can fork out units faster and cheaper than most. Besides benefiting from special bonuses, cultures also posses their own special unit. The Britons have their famous Longbowmen, the Japanese command Samurai while the Persians have powerful War Elephants, to name a few.

Just as there is no real dominant civilization, there are no dominant units. The Teutonic Knights are very strong, but slow, which makes them easy prey for cavalry archers. The Mongol Mangudai (unique cavalry archers) are deadly to all infantry, but cannot hold up against foot archers or light cavalry. The Persian War Elephants are hard to kill and receive a bonus when attacking buildings, but they are very expensive and weak against cheap spearmen. Every unit, even the most expensive ones, have at least one critical weakness that you can exploit.

Rushes are also not as efficient in Age of Kings, or at least not in the buildings phase of earlier ages. You can only train basic militia in the Dark Ages, and they are not very strong, nor are resources easily accessible for players to pour everything into a large, disposable raiding party. Also, you can garrison your almost-defenseless villagers in the town center where they can usually make short work of a Dark Age raid. In the Feudal and Castle Ages, the civilizations have access to towers, walls, and castles that make it possible to set up strong defenses.

In the Imperial Age, your attack options open up and you get access to powerful siege engines, including the trebuchet, which can reduce a building to rubble very quickly but is virtually worthless against anything that isn’t stationary. In the long run, players who dig into their home town and stay there will find themselves running dry on resources by the Imperial Age. This is a good a time as any to go on the offensive.

Although the game really shines in multiplayer, there are also four campaigns (plus a tutorial) set around historical figures that loosely follow the major campaigns of those figures. Joan of Arc starts out a peasant girl who must raise an army and drive the British from France. Ghengis Khan must unite the various Mongol tribes into a single army before setting out on his conquests. The Saracen king, Saladin, has to bring the other Middle Eastern kingdoms into line before driving the Crusaders from the Holy Land. Finally, Frederick Barbarosa sets out to rebuild the Holy Roman Empire in the image of Charlemagne.

You play both past and new missions from the campaign screen.

The French and their extravagent Gothic cathedral.

The Ordeal of Command

One complaint you could throw at the original Age of Empires had nothing to do with the game itself, but with the advertising that showed armies arrayed in formation preparing to do battle. Unfortunately, Age of Empires, like many other RTS games, didn’t have the benefit of formations.

Age of Kings answers that complaint somewhat at least. When you grab a bunch of infantry and move them, they fall into a line for short moves or a column for long ones. If you grab different types of units like infantry, archers, and siege engines, they will fall into a logical formation with the most heavily armored units towards the front, ranged units next, and siege engines nestled in the rear.

It looks all very nice and organized during long marches, but the formation option has limited tactical value when swords and shields start clashing. Huge orderly armies quickly disband and work as individual units, and battles (especially large ones) once again degenerate into confusing click fests. Soldiers have short attention spans, so you must always shuffle control groups and constantly assign new targets just to keep your troops focused. The unit AI is overall improved from the first game, but is still a hassle to lead organized raids with.

Rally points are a positive addition over Age of Empires. Any structures that can build or garrison units can have a gather point set for them. Any unit created by that building will automatically head for the gather point, and if it is inside a building that the unit can enter, it will automatically garrison. The town center can set gather points on resources and newly created villagers will automatically start collecting that resource when created. This has since become one of the “must-have” features for all real-time strategy games. 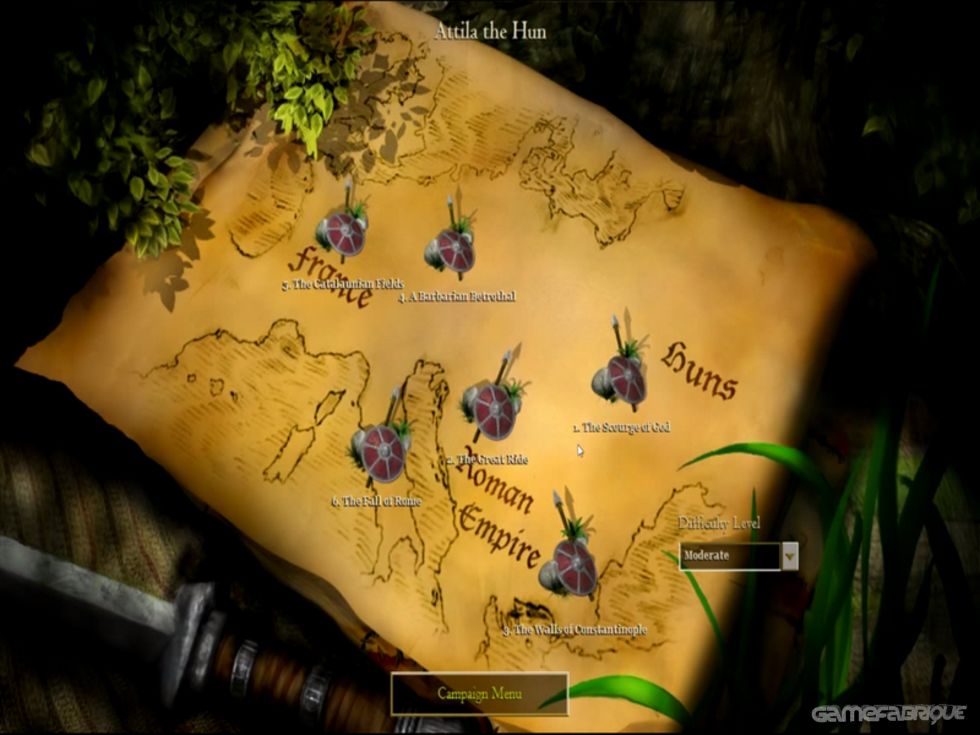 While the interface allows for far better control of your armies, the AI is still the only major problem with the game. Never mind the behavior of your computer-controlled enemies, which are otherwise tolerable if a bit weird (eg: suicidal lone knights attacking Castles). The real issue here is when you command your own men who have a single-minded focus to kill whatever they see first. Leading large-scale raids into enemy towns is extremely frustrating because your army tends to split up and attack nearby buildings with complete abandon, ignoring more urgent threats. This entails that you babysit your army so they attack enemy soldiers first and buildings second, continually applying corrections as you go. Let them loose and it’s absolute mayhem with no hope of victory. Throw in a few catapults (which inexplicably inflict friendly splash damage) and you’re guaranteed to have a bad day.

The chaotic AI is only partly addressed by changing the unit behavior of the selected unit from ‘aggressive’ (default) to ‘defensive’, which makes them a little more manageable. Other options will turn your units completely inert, which in itself can have specific uses. For one thing, your catapults won’t launch boulders everywhere haphazardly, always killing your own men in the process. But there’s still no way of making soldiers ignore buildings and focus on just attacking other troops, and, when necessary, hostile Towers and Castles.

The less-than-ideal AI and extremely drawn out campaign missions are the only things keeping AoE 2 from a five-star rating, but it stands tall regardless. It looks great, is very well balanced, and is easy to get absorbed in. The game has more strategy and fewer mouse gymnastics than the average RTS game from the same period, and while it’s probably not the best RTS game ever made, it does offer some undeniable fun.

I was hoping for so much more. The inability of your army to help defend your castle and the extremely long and costly build time makes this game barely better than building a house of cards for someone else to knock over. At this point the only reason I continue playing is after investing all this time I view it more as a sim city game and I'm curious to find out what my final build will look like in however many decades it might take to finish. Adding the ability for your army to help defend your castle and allowing user input when on-line in defending your castle would go a long way to improving gameplay. UPDATE: Game is Broken. Don't waste your time until they balance the characters and weapons. Nothing says unbalanced more than Hero Charles Martel. He has the power to make every defense you have target him. his health is 22,500 3X more than most buildings. Combine him with multiply fast moving battering rams and catapults and your defense will target him even as they are destroyed